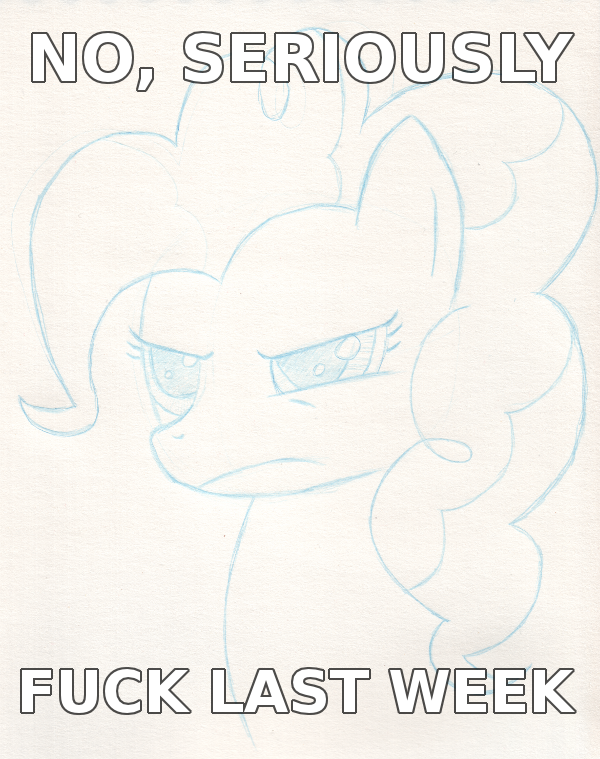 So last week followed an awesome weekend, and took it as its cue to suck considerable amounts of ass.

Over the course of a mere handful of days, I faced a near terminal clash with a friend, a major artistic setback, and my first evening babysitting while C. was on night duty at the hospital.

The latter may not sound that bad. But let me tell you the whole story.

It just so happens that the afternoon of the same day, a ticket controller got knifed in a train on the other side of the country. (He's okay now, as far as I know.) Immediately every controller in the country went on strike. That's the one case where they're allowed to do it without prior warning -- when their personal safety is deemed at risk. Must have been one hell of a knife, with one hell of a reach.

Thankfully, the train company figured that so long as they had drivers, maybe for the evening they could perform the public service for which they're subsidized without ticket controllers... Ah ah, kidding. I came out of the subway to a train station packed full with people -- vastly moreso still than usual -- and not a train moving.

Thankfully, the train company figured that so long as they kept people well informed of what few departures were still scheduled, people could get organized to find a way home one way or another... Ah ah, kidding. Their solution was to broadcast announcements along the line of "please postpone your journey". And to keep every train scheduled as usual on every display to keep our hopes up and then cancel them at the very last moment.

Thankfully, the train station is well furnished for such situations and the wait was not too uncomfortable... Okay, I'll stop there, this isn't funny anymore, if it ever was.

So there I was, fuming powerlessly at each renewed advisory to please postpone my journey, and not even so much wanting desperately to go home as fretting as all hell about my kids. At least they were at their nanny's, not a daycare center that would have tossed them out to the street.

To cut this short, there was not a single train that left for my station, where, incidentally, my car was parked. Once it became clear there wouldn't be one all night, I punched my way into the first train that left in the correct general direction, and then had C. send one of her underlings interns to pick me up there and drive me to where my car was parked, while I coordinated with the kids' nanny to keep them for the night -- never mind that we're already reaching the upper limit of what billable hours we can afford to pay her -- if she couldn't keep them awake until I arrived. At least the fierce viciousness I've acquired over months of this daily commute earned me a seat in that train, where many were not so lucky.

I don't remember much of the evening. It was already way past bedtime when I thanked C.'s intern for the ride, and took my car, and fetched the kids and took them home and then to bed, and subsequently collapsed. I don't even remember if I ate anything that evening. And then I got up at 6am because I had to take care of the kids in time to drop them off at their nanny's and then catch my train. Another day, another commute.

So then I drew Pinkie Pie and I felt better.

And if I'm only posting this now, it's because as far as trains are concerned this week is being even worse, so fuck this week too.
Collapse